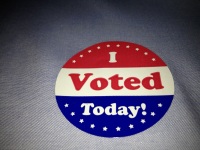 I was standing in a voting line recently, waiting to cast my secret ballot for several candidates and some local issues regarding increased taxation.  A young woman a few feet away was in conversation with an older man, wanting to make sure that he also believed, like she did, that all voters should always respect the beliefs and attitudes of the opposing political party.  I smiled to myself, realizing how shortsighted this woman’s perspective seemed to be, to me.  Surely she would not extend her naïve sentiments to cover every election in every century, surely not.
Then I remembered some of the candidates running for the presidency of the United States in late 1960s and early 1970s and saw vividly the naiveté of this young woman’s perspective, even when they were candidates in this democratic land of America.  I suspect, for example, that this woman would not have extended her magnanimity to Alabama Governor, George C. Wallace, assuming that her own views encompassed at least 50 years of historical awareness.
It may have been pure rhetoric when Wallace attacked the “hippies” of the late 1960s and early 70s by saying that if one of them were to lie down in front of his car [to make a political statement or to protest] that it would be “the last automobile he will ever lie down in front of.“   On the issue of racism and segregation, however, Wallace’s statements were anything but mere rhetoric.  Until the United States Federal government intervened Gov. George Wallace supported segregation, even of State universities in Alabama and used the “N-word” with frequency and in ways unimaginable for a politician today.  While seeking reelection as governor and gathering votes to become President of the US, Wallace never abandoned his sinful ideology and the cultural idolatry that was expressed in these words of his inaugural speech as governor of Alabama, “I say segregation now, segregation tomorrow, segregation forever.”

Moving now to the era of the prophet John on Patmos, some scholars have manifested a profound naiveté in their views about the evil and sinful policies carried out under the umbrella of the Roman Empire.  Prof. Leonard Thompson, for example, suggests that Revelation in fact was written in a context where Christians were really experiencing few difficulties with the Roman Empire.  According to Thompson the traditional image of the Roman Emperor Domitian, for example, is pure libel promoted by some ancient Roman historians.  Consequently, Prof. Thompson suggests, modern scholars need to revise their estimation of Domitian and, therefore, their estimation of the Roman harassment of Christianity reflected in Revelation.  What a non sequitur!  It is fundamentally irrelevant whether Domitian was a good administrator or whether he killed senatorial families that opposed him!  Perhaps he was the best Roman emperor ever.

Many, many times throughout history nefarious actions and ideology have been associated with “nice people,” even “nice rulers.”  Thousands of the pious worshippers of Bacchus were arrested and executed by the Roman Senate in 186 BC in its famous “Decree of the Senate” to suppress the worship services of the devotees of Bacchus in Rome and other parts of Italy.  These pagan documents indicate that earlier pious Romans had also suppressed other unacceptable, anti-Roman religions; these Senators and their ancestors who killed followers of other unacceptable religions were also probably good administrators and “nice men.”
Looking at the later evidence of the Roman Empire, all three of the early Roman emperors Augustus, Tiberius, and Claudius suppressed and persecuted the religion of the Druids in Rome; surely as least one of these emperors was as nice as Domitian, yet religious persecution was within the job description.  What of the Roman lawyer and governor Pliny the Younger?  Based upon what Pliny himself wrote and others wrote about him, he was kind, eleemosynary, just, honorable, and well loved by many.  Yet, based upon his own official report submitted to the Emperor Trajan (preserved in his personal copy of his letters to the Emperor Trajan), he singlehandedly decimated by execution and deportation the Christian movement in the Roman province Bithynia-Pontus in ca. A.D. 112 (Pliny Letters, Book 10, letter 96).
It seems to me that the Revelation of John is a better indicator of the horror and suffering endured by some believers in western Asia Minor than the views based upon a revised estimation of Domitian (a revision that might be needed).  One of the problems with Prof. Thompson’s revision of the situation of the believers to whom John writes is that it is not radical enough.  An appropriately radical revision would require that we sweep away our own naiveté about the ostensible goodness and tolerance of the Roman Empire.  Rome was created, sustained, and advocated on the basis of its benevolent despotism.  Admittedly, Rome brought a certain kind of “law and order” to the Mediterranean Basin and this yielded certain fruits of civilization.  But for this discussion, it must be remembered that Rome was rarely benevolent to those who questioned Roman hegemony or opposed Rome’s convictions about its divine right to conquer and administer the regions of the world it desired.  The Latin author Vergil stated this Roman view of manifest destiny in his famous epic poem the Aeneid.  There the Roman god Jupiter promises that he has given Rome boundless expansion and hegemony over the world (Book. 1.278-79, imperium sine fine dedi).  Those who cannot see the despotism of Rome have, I suggest, already  “drunk the Kool-Aid” of Rome’s apologists.
The official literature of Rome occasionally allowed a dissenting voice to be heard.  One such voice is that of Calgacus, a leader of a tribal confederacy in northern Scotland, who unsuccessfully resisted Rome imperialism in A.D. 83-84.  These are his less than naïve words about Rome, which provide a window into the mistreatment of the followers of the Lamb a mere decade later in another region of the Roman Empire.
It is no use trying to escape their [Rome’s] arrogance by submission or good behaviour. They have pillaged the world: when the land has nothing left for men who ravage everything, they scour the sea. If an enemy is rich, they are greedy, if he is poor, they crave glory. Neither East nor West can sate their appetite. They are the only people on earth to covet wealth and poverty with equal craving. They plunder, they butcher, they ravish, and call it by the lying name of ’empire’. They make a desert and call it ‘peace.’

5 thoughts on “Naiveté About Politics, Now As Well As Then”